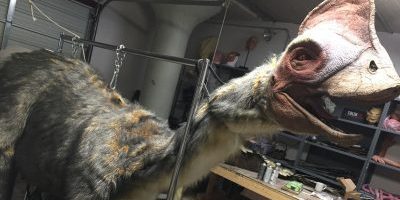 Happy New Year! We have lots of projects in progress here at Tolin FX, right on the heels of our busiest year ever. We’re psyched to be working on several creature making jobs at the moment, and the common thread is dinosaurs. Dinosaurs for creationists AND dinosaurs for evolutionists.

Last year we helped deck out the newly opened Ark Encounter in Kentucky with thousands of props and featured set dressing such as barrels, light sconces, amphora and feeders for the amazing life-sized replica. We also created two life-sized hippo sculptures to reside on the Ark. Tolin FX is excited to continue our work with the Ark Encounter by sculpting, molding and painting two Dimetrodon dinosaurs who will also reside on the colossal ship.

Dinosaurs on the Ark – surprise!

The Ark Encounter is run by Answers in Genesis, whose mission is to ground scientific research in Creation theory. According to AIG, dinosaurs did in fact make the trek on the Ark with Noah and the rest of his menagerie. You may or may not agree with this hypothesis, but we always enjoy helping fellow artists and visionaries bring their dreams and ideas to life. Whether or not you are down with the science behind the Ark Encounter, you should definitely consider a visit. The Ark itself is impressive, a massive sight against the Kentucky horizon, built and stocked according to the specifications given to Noah by God in the Book of Genesis. If you decide to go keep an eye out for the hippos and dimetrodon!

On the other side of the spectrum, Tolin FX is creating a dinosaur for Pittsburgh’s Carnegie Museum of Natural History. Anzu Wyliei (pronounced “wily eye,” impress your friends) is a new species of dinosaur discovered in 2014 and named one of the Top 10 New Species by the Institute of Species exploration. in 2015. The fossils of the Anzu Wyliei reside in the Carnegie Museum, and the dinosaur itself was named by museum researcher Matthew Lamanna (check spelling.) We are excited to be collaborating with Dr. Lamanna to bring Anzu to life! Tolin FX is helping to create a life sized “walk around” dinosaur suit in the likeness of Anzu. We first became involved with CMNH when they hired us to do some repairs to a walk around dinosaur suit they already had, “Spiney” the spinosaurus. This time we are creating the actual suit around an armature provided by the museum. An actor will wear the suit, which will look and move in a life-like fashion, for shows, school visits, and special programs. The suit will be fitted with a camera and monitor system to enable the actor to see and interact with audiences.

As part of the project Steve and his lovely wife Erica met with Dr. Lamanna and other museum staff and enjoyed an incredibly interesting and informative session! We even got to go into the paleo lab and hold an actual dimetrodon fossil, which was a treat after our work with the Dimetrodon. One of the great things about the work that we do is that it enables us to constantly learn and find out about other worlds and areas of study, to build skill sets and constantly grow.

We are loving our time working on and creating these two dinosaurs for two VERY different (yet somewhat similar) exhibits.