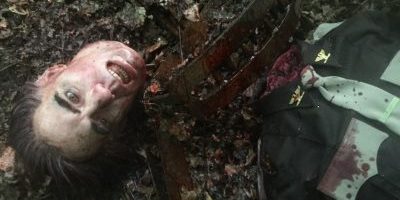 Another busy summer is coming to an end. (Emphasis on busy!) So maybe we didn’t get much of a vacation, but we had a fantastic summer. Lots of project, changes, and growth.

We at Tolin FX have been working on loads of great projects in film, TV and theatre, and we’re psyched to tell you all about those. But our BIGGEST piece of news is our new location and studio space!

After years of working out of our basement shop we finally outgrew it, and in April we secured the lease to an amazing 2500 sq. foot space in the X Factory in Point Breeze. We are mere minutes from 31st Street Studios, Filmmakers, and other sound stages, nestled close to Construction Junction and the East End Food Co-op. It’s a perfect location, and we are thrilled about our new home.

Having more space means tackling bigger projects and taking on a bigger crew! The Tolin FX family is growing and making the most of the extra space in the new studio.

Since the beginning of the summer we have been working tirelessly making props and makeup effects for Outsiders, one of the biggest projects currently filming here in Pittsburgh. We can’t go into too much detail about this upcoming TV series, but we can say that we got the chance to make some amazing things! Here’s a cool article about the show in the Post-Gazette. Outsiders has employed many of our Pittsburgh friends as cast and crew, and has been a boon to our city financially and artistically. Tolin FX has been thrilled to be involved in the special make-up effects and prop creation for this production. We can’t wait to see the final result on WGN America in 2016!

We started the summer creating non-explosive joy bombs for the punk band Anti Flag’s Brandenburg Gate music video. Using specially designed Squib FX rigs we showered the inside of one of Pittsburgh’s most beautiful churches and a Millvale school with flowers, glitter and confetti. This was our first music video endeavor, and was directed by Thomas Glunt.

We spend a big part of the summer bleeding and sweating for make-up artist Rick Prince’s upcoming film All Saints Eve. We all made a company move down to Nashville, TN to do the make-up effects and blood effects for Rick’s directorial debut. Our very talented friend and colleague Eddie Holecko also crewed up for the shoot, and we all enjoyed a fun working reunion in beautiful Tennessee. Find out more about Rick at his website, http://rickprince.com. Much luck to Eddie who has made the move to L.A. where he will surely find great success, and to artist Allison Boyle who later moved to Nashville and is greatly missed by all at Tolin FX.

Check back to find out the rest of our summer story, and maybe a few snaps too. (Sorry, we don’t ‘gram. Not yet  Fanyway.)