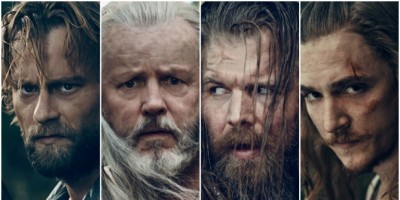 Season 1 of Outsiders has finally premiered! We have been on pins and needles waiting to show the work that we spent a good portion of last year creating. Outsiders is about an Appalachian family, the Farrells, who have been living on a mountain top in Kentucky for the past 200 years, and now find themselves on the brink of eviction as a coal company moves in, to mine their land. The Farrells must fight to keep their way of life even as their clan experiences inner strife.

Our special effects were featured in all 13 episodes of Outsiders, Season 1. And now that the first two episodes have aired on WGN America, we finally get to reveal some of the work that we were able to contribute to the show.

For the pilot we created safety and bloody props and makeup effects. Our first taste of blood in Outsiders features a safety rubber carving knife which was cast from a mold from the Szmithfield Street Pictures’ film Hack several years ago. The knife is used with our very own Squib FX blood to portray a brutal assault, which sets off a chain of events pitting the Farrells against the nearby town (Town-ies). Later in the episode more Townie on Farrell drama leads to bloody consequences when Hasil Farrell, one of the Farrell clan played by Kyle Gallner of American Sniper and A Nightmare on Elm Street 2010, finds himself drawn to the town and it people. His curiosity and interest in a young lady in the town lead to Hasil losing two of his fingers. Of course this is where we came in! We lifecast Kyle’s fingers and created a pair of silicone replica fingers. These fingers are seen in a close up shot and much attention was paid to subtley of color and the amount of Farrell dirt that was under the fingernails. We also created a bloody hand rig for the effect, but as so often happens, ended up using a simple out of the kit blood effect to create the illusion that Hasil had just lost two of his fingers. Pit Fight at the Quarter Moon!

Episode 2 continues to feature Hasil’s hand rig, wrapped in a bloody bandage. We also see the maimed fingers, with a makeup (created by Tolin Fx and applied by make-up artist Doug Fairall. Tolin FX created several props for the Pit Fight scene as well. We made both the hero and breakaway clubs used by Asa (played by Joe Anderson). There was great coverage of the breakaway club doing its job – breaking! Additionally we made a foam version of the hero club prop for safety usage. Foam and safety props have become a Tolin FX specialty. We’re a safety-first outfit. For a behind the scenes look at the Pit Fight click here. Bonus: Tolin FX crew member Ted Williams is one of the spectators in the front row! Look for the guy with the beard. Oh wait…

You can catch the first few episodes of Outsiders at wgnamerica.com/series/Outsiders. Stay tuned to check out more of our work and watch this exciting new series unfold!