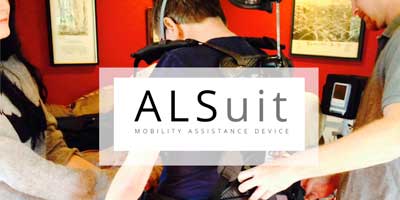 Several months ago we were approached by a script supervisor friend of mine Meghan Graham to help her with taking care of her brother who had been diagnosed with ALS many months prior. Since being diagnosed with ALS Mr. Jeff Graham has been slowly losing nerve and motor function including the ability to hold his torso upright and to hold his head up. He is able to walk with a walker still, but wanted help keeping the frame of his body upright. He and Meghan had both done lots of research into some type of device or framing for those afflicted with ALS. Perhaps some type of suit that would help Jeff stand more upright when walking with his walker and when sitting. Jeff was far from the first person diagnosed with ALS suffering from these symptoms, certainly the medical and industrial design communities had come up with a solution that met these needs. But their search came up empty.

So when Meghan was then faced with the challenge of having something like this custom built, lucky for us she thought of Tolin FX. So we met with Jeff and Meghan and talked about what we could build and what Jeff’s needs were. It was clear that it would need to be lightweight, and adjustable for comfort. We talked about ventilation and cushioning and various methods of support. I left that meeting with a pretty clear idea of what we needed and I slept on it for a couple days. One thing we all knew for sure was that we would need to start with a lifecast. Shortly thereafter Allison Boyle and I drove to Jeff’s home north of Pittsburgh to lifecast him. We met his family and all of his people and set up a spot to lifecast him in his bathroom. Lifecasting a person who has difficulty sitting up had its challenges for sure, but we took two successful lifecasts of his head and his torso. We learned a lot that we’ll take into the next similar situation.

While we were there I showed Jeff some designs that I had done based on our discussion and he was super excited with what he was seeing. The basic design was to build a carbon fiber lower back brace supported by an expedition backpack type hip strapping. From the lower back piece a titanium rod would extend up to a carbon fiber shoulder piece. The two ends of the titanium rod would be attached via two ball heads to the carbon fiber, allowing for 360° adjustability. We would also construct a carbon fiber shell for Jeff’s chest. It would connect to the shoulder brace with nylon straps and padding over and under each arm. The idea was to sandwich Jeff’s chest between two pieces of carbon fiber lined with medical grade memory foam and support that upright from the hips. But we also needed to support Jeff’s head. So we build a back skull piece from his lifecast which was supported from the shoulder plate the same as the shoulders were from the hips- with two ball heads and a titanium rod. Jeff was 100% on board and we set right to work building the first prototype.

Allison and I went back to the shop and she finished the lifecasting. She built the carbon fiber pieces directly from the lifecasts and we began discussing how to best go about fabricating my design. We made many adjustments and tweaks, but a couple weeks later we had our first prototype of the ALSuit! We excitedly fit Jeff and it was amazing!!! Suddenly he could breathe way better and was totally being supported upright. There were many successes with our first fitting, but we definitely had a pile of notes. So we spent the next week working those notes and adding some additional ideas and fit Jeff again. Even better! So now we are finishing the next round of notes and Jeff is going to wear the suit for a week or two and we’ll see what his notes are for us then.

It has been a really fulfilling experience for us so far to be working with Jeff and his ALSuit. Most of the time we are making monsters or squirting fake blood on people, and while art and entertainment certainly can serve the greater good it feels really good to be helping someone directly in a way that has such a powerful and immediate effect on their everyday quality of life. Our plan is to create a website as a platform to make our designs and plans available to the world for free so that as many people who have been afflicted with ALS may benefit from our work. We will also sell suits on the site and offer custom suit fabrication services for those suffering from other support issues arising from this or some other debilitating disease. Excited to see where this leads. Keep you posted…