All Fired Up: Ohio Burn Unit 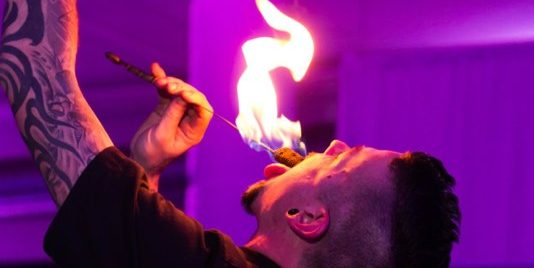 The field of special effects and makeup covers a wide range of disciplines and skill sets. Effects artists can be expected to execute a bloody gore makeup in one scene and an exquisite beauty makeup in another. They can build giant animatronic pieces, like life-sized dinosaurs, and full body creature suits to be worn by an actor, such as Harry in Harry and the Hendersons, or the Ennuati suit Tolin FX created for the film Beast of the Water, which was recently named an Official Selection at the International Black Film Festival held in Nashville, TN.

Many effects artists focus on a specialty. With the advances in animation technology and wide availability of programs, CGI has become an indispensable tool in filmmaking, even at the micro-indie level. Many artists therefore specialize in VFX, computer generated image creation, manipulation and animation. Others focus on blood-slinging (see Squib FX!)

At Tolin FX we do a little bit of everything, with an emphasis on practical effects, and there are times when we collaborate with expert specialists for certain effects or gags. One of the fields which we partner for is the area of pyrotechnics. (You don’t want just any yahoo strolling around hell’s half acre lighting stuff on fire.) Pyrotechnics is an area where you want and need a licensed specialist. Luckily we know a great one! We first met inferno expert Schuyler White when we worked with him on the film Haunt, now available on demand (great Halloween flick, btw.) Schuyler is a stunt person and holds 11 titles in the Guiness Book of World Records for his work with special effects and fire work, including full body burns. He and the other members of Ohio Burn Unit also offer live shows and programs in addition to their work on commercials, TV shows, and films.

One of their most recent projects is the Netflix feature Little Evil starring Adam Scott, in which Schuyler plays a birthday party clown having a terrible day. Check out the trailer for a sneak peek of his work. Schuyler is also currently working with Tolin FX shooting a film on location in Ohio, starring Matthew Modine. We can’t say too much about current projects of course, but as they say, watch this space!

Working with Schuyler and Ohio Burn Unit allows us to add to our arsenal of services. They are licensed and insured experts who do excellent work and keep everyone safe. We are thrilled to have such a great partnership with such fire gods, and look forward to working on many more projects together!